Who do you think of when someone says “famous inventors”?

Ask someone to recite a list of famous inventors, and it’s likely they’ll be able to recall at least a few names from the top of their head.

Albert Einstein might be one of the first, followed by Isaac Newton, Thomas Edison or maybe even Leonardo da Vinci.

But it’s unlikely that any of the names given will be those belonging to women.

The sciences have long been dominated by men; women were only granted the right to education in the late 1800’s and the first female engineer to graduate with a Bachelor’s degree, Elizabeth Bragg, was in 1876.

1876: Elizabeth Bragg was the first officially recognised female engineer. She received her degree in Civil Engineering from the University of California, Berkeley.

Inventions You Didn’t Realise Were Thought Up by Women

Although women weren’t allowed to study engineering until the late 1800’s, that didn’t mean there weren’t any female engineers. Many of the inventions we use today were originally thought up by a woman, whether accidentally or otherwise!

Mary Anderson was on a visit to New York when she noticed that her driver was forced to open his window so that he was able to clear the slow from it. Anderson watched as every time the driver opened the window, people in the car became cold.

When she got to her hotel, she started drawing her solution of a rubber blade that could be moved from inside the car, and in 1903 was awarded a patent for the device. Unfortunately, Anderson never profited or received credit from her invention, as car companies were reluctant to invest. Later, wipers became a standard fitting on cars.

Ada Lovelace was an English mathematician and writer. She is recognised for her work on Charles Babbage’s proposed mechanical general-purpose computer, which was called the Analytical Engine. She is regarded as the first to recognise that the machine Babbage has made could do more than just calculate numbers and to have published the first algorithm intended to be carried out by such a machine. Lovelace is regarded as one of the first computer programmers as a result.

Josephine Cochrane was a frequent host and entertainer. She wanted a machine that would wash her dishes more quickly, and be less likely to break them than her servants.

Cochrane designed a machine that used a motor that turned a wheel inside a copper boiler. This machine was the first automatic dishwasher. 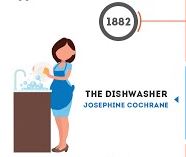 In 1886, Cochrane’s alcoholic husband left her in huge amounts of debt when he passed away. This motivated her to patent her invention and open her own factory where it was mass-produced.

While Charles Darrow is often credited with creating the popular strategy board game known as Monopoly, a political activist named Elizabeth Magie actually created them at the beginning of the 1900’s, as a way of demonstrating the issues with capitalism.

Magie patented her original design in 1904, calling it The Landlord’s Game.

Monopoly, as we know it today, was published several decades later in 1935 by the Parker Brothers. They discovered that Darrow was not the sole creator of the game after paying him just $500 to buy the patent.

Many of the items we use and see around us today were thought up by women, even before they were allowed to study Engineering or become qualified Engineers. Other examples include the first circular saw (one of the earliest known inventions thought up by a woman), the submarine telescope, and aquariums.

This website uses cookies to improve your experience while you navigate through the website. Out of these, the cookies that are categorized as necessary are stored on your browser as they are essential for the working of basic functionalities of the website. We also use third-party cookies that help us analyze and understand how you use this website. These cookies will be stored in your browser only with your consent. You also have the option to opt-out of these cookies. But opting out of some of these cookies may affect your browsing experience.
Necessary Always Enabled
Necessary cookies are absolutely essential for the website to function properly. These cookies ensure basic functionalities and security features of the website, anonymously.
Functional
Functional cookies help to perform certain functionalities like sharing the content of the website on social media platforms, collect feedbacks, and other third-party features.
Performance
Performance cookies are used to understand and analyze the key performance indexes of the website which helps in delivering a better user experience for the visitors.
Analytics
Analytical cookies are used to understand how visitors interact with the website. These cookies help provide information on metrics the number of visitors, bounce rate, traffic source, etc.
Advertisement
Advertisement cookies are used to provide visitors with relevant ads and marketing campaigns. These cookies track visitors across websites and collect information to provide customized ads.
Others
Other uncategorized cookies are those that are being analyzed and have not been classified into a category as yet.
SAVE & ACCEPT